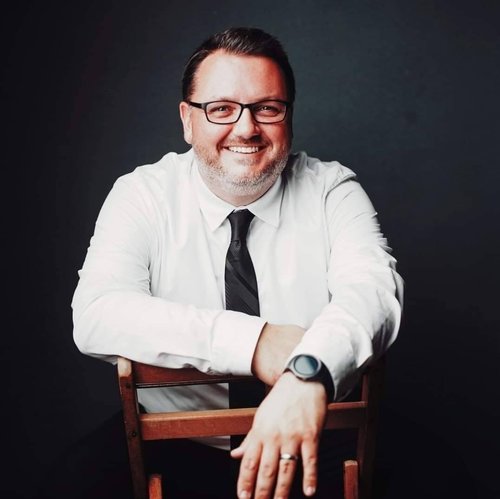 This is a second career for Eric. In his prior
career, he held positions as a musical instrument repair technician at Midbell
Music in Sioux City, IA, he then taught Band Instrument Repair at Western
Iowa Tech Community College for a year and was offered the position of head
technician for Omaha Public Schools in Omaha, NE. Eric is currently pursuing
a Master of Arts in Diaconal Ministry Degree at Wartburg Seminary in
Dubuque, IA and is in candidacy for Word and Service in the synod. Eric comes
to us after a year working in the office of admissions and student services at
Wartburg Seminary as an admissions associate.

Eric was born and raised in Sioux City, Iowa. He and his wife Rhonda were
married in 2003 and have two children, Ella (15) and Tucker (13). He and his
family moved to Council Bluffs, IA in 2009, where they became members of
Saint John Lutheran Church.
Eric has a heart for serving the people, a passion for building community,
and a love of conversation whether it be an elevator ride or a life story.
“Conversation is how we learn from and connect with each other, but also
how we learn from and connect with God.”